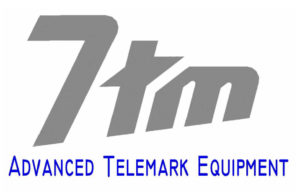 7tm has been founded in the season 1999/2000 by Reinhold Zoor, an engineer which has developed the Silvretta Easy Go, Silvretta 400 and many other suggessful wintersport products. The 7tm All Mountain was the first Telemark binding with a release system proven by the German TUV according to DIN/ISO standards.

We offer two styles of telemark binding with the new XR springs, which makes the the heel re-tension system of the 7tm Power bindings much more active now.

This latest version of the 7TM binding has an increased spring rate to make the binding more „active“ and powerful, in fact 7tm are quoting a 25% increase in „power“. The former version 7tm was a very neutral binding which was updated with the introduction of the power pin (which moved the pivot point back under the foot). These new ones take another step but still have the removable pin if you wish to make them more neutral feeling. As the telemark world becomes more and more focussed on NTN if you prefer 75mm then these bindings offer excellent, „tuneable“ performance.

These Tour bindings are the free-pivot versions of the Power ones, essentially if you have big boots you’re far better off with these despite the extra weight, as you’ll expend less energy than you would flexing the bellows on your boots. They still have the removable pin, arguably it’ll make less difference because of the nature of the tour binding, you’re less likely to remove the pin to ease climbing. However it does give increased power transfer and improves boot retention. Total binding height is 33mm and it comes with a climbing bar and riser.