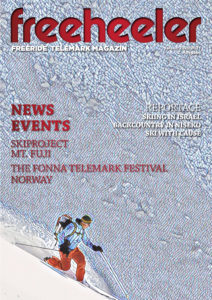 The starting signal has been given for this year’s Freeheeler European Opening at the Hintertuxer Glacier. For three days, with free heels and bented knees, they went down the slopes in a unique way with elegance and acrobatics. No matter if moguls, freeriding, steep terrain, jumping or touring – the old Norwegian technique is still the most versatile way of skiing.

Three days with 500 Telemarkers from over 20 nations from Europe and overseas in the glacier ski area Hintertux for telemarking were on the agenda. All telemarkers were warmly welcomed by the Freeheeler welcome team at the base station and the weather was also good. Up at the Tuxer Fernerhaus, not only super powder snow awaited the participants, but also an expo with telemark test material that was second to none.

In the second issue of Freeheeler, there is now something to read. Bob Mazarei, told us about his trip to Norway and Israel. Jacob Slot, was with his ski project at Mt Fuji. Lisa Gotsche, is training Nepalis with „Ski with a Cause“, with the goal: To put the Nepalese ski touring tourism on local legs.

J.T. gives us an insight into the backcountry trip with his father to Niseko in Japan.

This winter the Freeheeler Testival Tour is increasingly on the road with new tour stops in Switzerland. After the Swiss Championships in Melchsee Frutt the Tele X tradition will be continued, which will end in Gstaad with the Tele X Final. In Valais we will celebrate 20 years of the Telemark Club Belalp with the Teleday to Scuol and Andermatt, then the Telemark community will meet in Mürren at the Telemark Only to end the season.

If you still haven’t had enough of Telemark, you can take the last Telemark turns under the Mid Summer sun at the Fonna Telemark Camp.

The Telemark winter is long and beautiful.

See you soon and greetings